Everyone has heard of she sheds which I think is a  great idea.
With my condo the only spot I have is a rather weathered deck off the dining room. It was very badly weathered  with  boards  mildewed and  starting to rot.   . 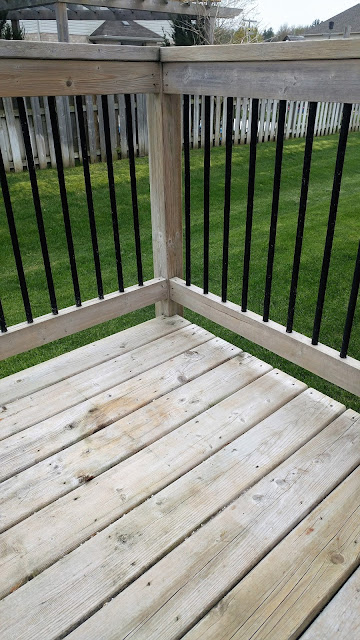 Missed my  old screened porch  at Avon  .. Could I make something similar? Also not a lot of privacy from  2 homes  just over the fence.
Came home from  cruise and decided to  get busy refurbishing  deck.
Unfortunately the condo only allows  Thompsons water seal . Did find  a cedar colour Thompson's that matched  my brick  .. Got busy.
My finished product with  gazebo installed and new  lounge furniture,Added   rug and Chinese lanterns that light up  in the evening, Candles for a bit of glow. Pots of fragrant plants. Keep the  screens drawn  so gives a feeling of enclosure and privacy.
Coffee  in the morning , lunches and  suppers , reading  with a glass of wine ,
Might  not be a she shed but this she deck makes me very happy. 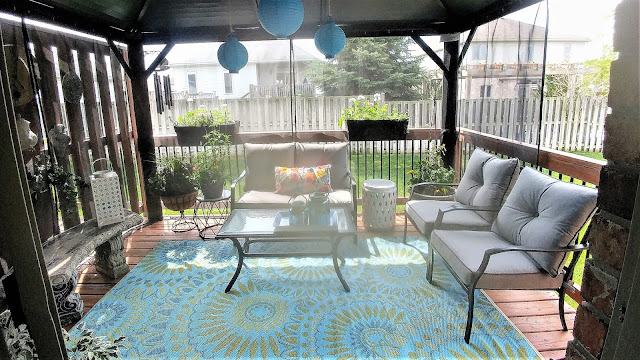 Posted by Rosemary at 10:01 No comments:

Almost the end of my transatlantic cruise ..
Ship docked at Le Havre  the 2nd busiest   commercial port in France .  Interesting to see the  city which was one of the most heavily bombed during World War 2. It was rebuilt   with many concrete buildings. I did not find them  attractive. ﻿﻿
﻿Boarded a bus for the long drive to Paris.  Well worth the ride.  ﻿ 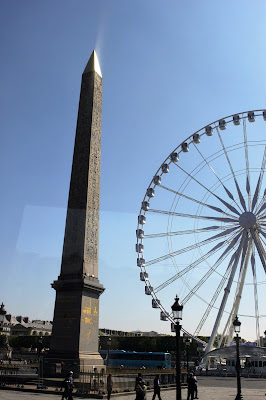 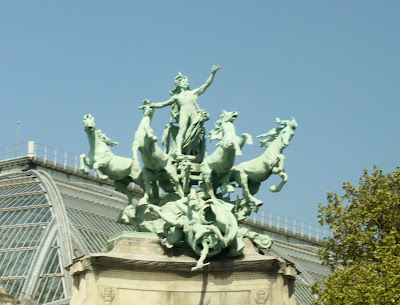 Quadriga at Grand Palais
Paris is April  so befitting the   song...... Chestnut trees in blossom  , spring green trees and  grass.  Cafes on every street corners,    full of patrons. 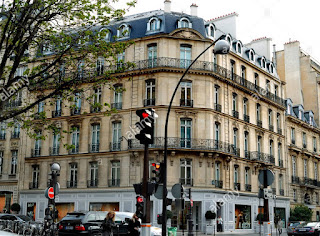 Posted by Rosemary at 11:46 No comments:

Bilbao turned out to be one of my favourite  ports of call on my transatlantic   sea voyage.. This  industrial town  turned itself around when the steel industry  moved to Korea.  It is now  a tourist  center with the main feature the beautiful Guggenheim Museum. The museum is on the estuary of the Nervion River. .
﻿ This museum  was breathtaking  designed by a Canadian Frnk Gehry. It represents the maritime history of Bilbao with the  curved  shapes.
I have not been a fan of modern art but our guide 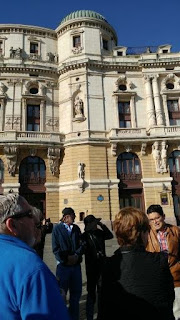 certainly educated us and I have come to an appreciation.  From the Snake  by Richard  Serro then the  Tulips by Jeff Koons, 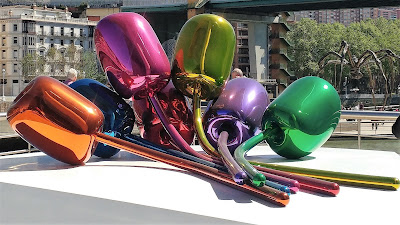 To The Puppy by same artist. 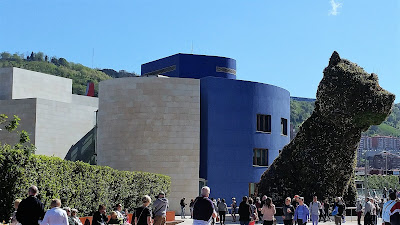 The Puppy was installed several years ago and  people liked it so much  it has stayed. The structure is made up of flowers that are  changed 3 times a year . April was the month I was there and it was made up of pansies......
The Old Quarter
Quaint  small  lanes , this area had been flooded in 1983  and restored. 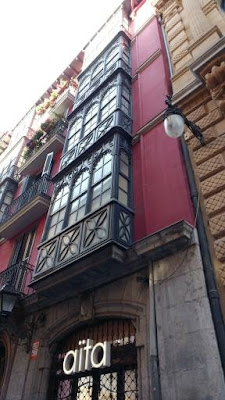 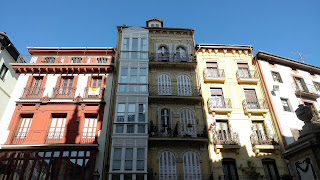 Loved strolling these   streets    ...architecture  so   picturesque, Highly recommend this   city  .
Posted by Rosemary at 13:27 1 comment:

From my home to yours  Have a great  day Canada! 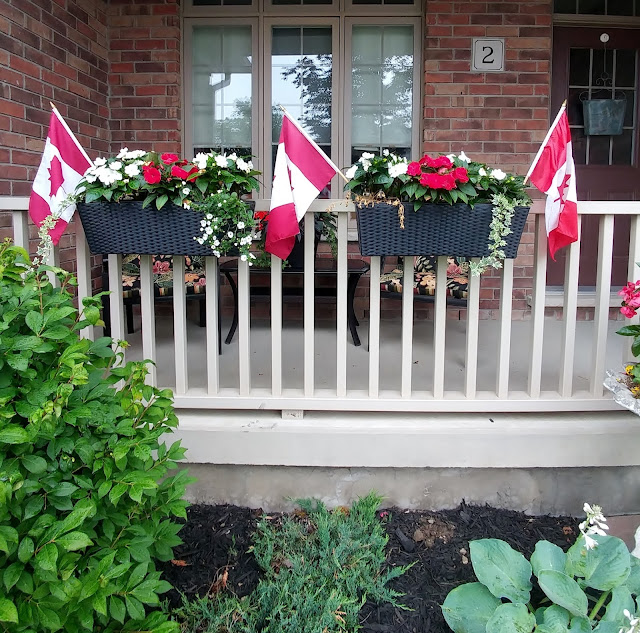 The ship docked in Lisbon, city of 7 hills, on a hot and sunny day. The Crown Princess sailed up the Tagus River under the  April 25th Bridge.
﻿﻿﻿ 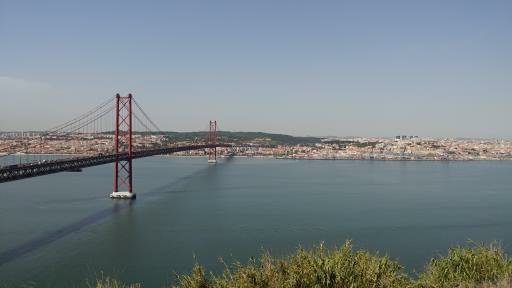 This bridge was called  Ponte Salazar, but after the Carnation  revolution renamed for the day  the government was overturned,
Beautiful   historic  church  Se Cathedral. 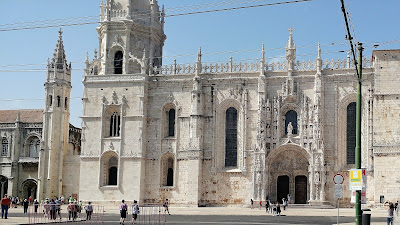 Large  squares  with bright white  buildings; Neo Classical influenced,  grace the city that was devastated during an earthquake in 1755.Only the Alfama  Moorish  quarter survived.
.
﻿﻿﻿﻿﻿ This was  modeled after  Rio De Janeiro Christ the Redeemer. Soars high above the Tagus River  and the bridge. Quite spectacular to see.
Returning to  Lisbon  off to see Belem Tower, 16th century  lighthouse, prison  defensive tower. 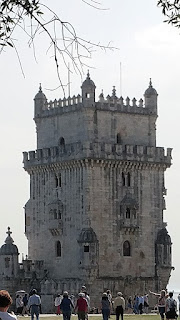 Not far away from  Belem is the Monument  of the Discoveries. It is shaped like a prow of a ship. It represents  a 3 sailed ship  with sculptures Vasco de Gama, Magellan, Cabal  , Prince Henry  the Navigator  at the prow holding  a small vessel. 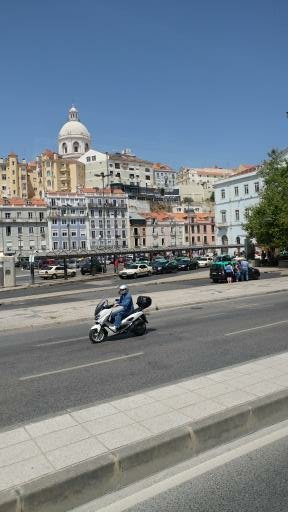